A Dear Friend I Never Met 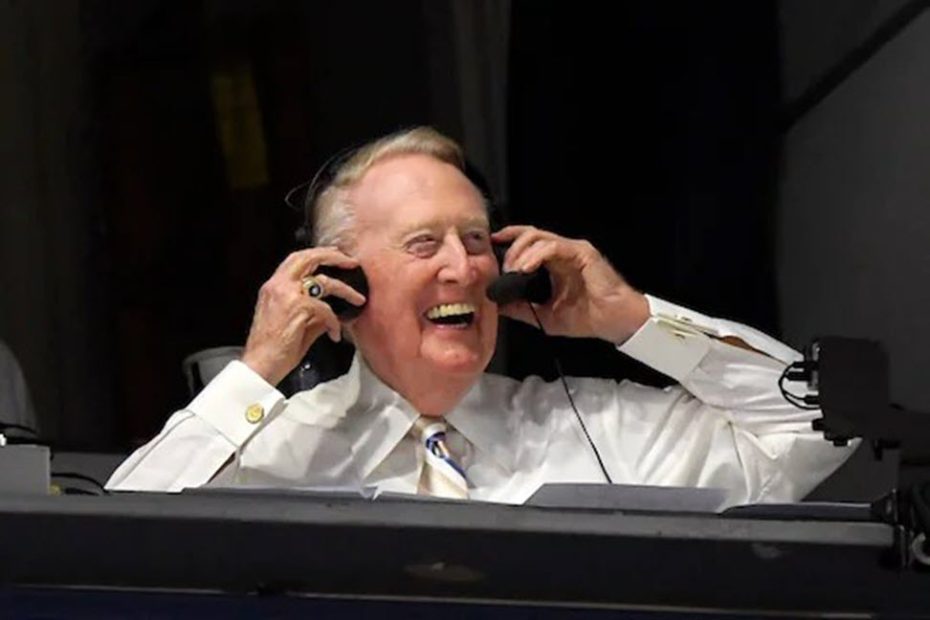 Perhaps it is just because I am getting older, but it seems like an increasing number of death announcements are of people that I have followed for many years – even decades. Some mark the end of life for people who devoted their lives to making this a better world such as John Lewis and John McCain. Others taught me things about living life better through their art, such as Robin Williams and Leonard Nimoy. I felt sorry that I would never see their art again, that our society would no longer have their inspiration and passion for the better part of human nature, but my regrets were mostly “out there” – external to me, somehow.

The recent announcement of the death of Vin Scully was very different for me – it was like the sudden loss of a dear friend that left me deeply mourning with a large empty place in my soul. I was surprised by its intensity and, as I began to recall all of my life’s memories that involved him, found several that I hadn’t thought about for many, many years.

Baseball has been part of my life for as long as I can remember. My mother gave me her father’s first name (William Morrison) as my middle name. He was a minor league baseball umpire in his younger days, aspiring to a career in the major leagues. He had been accepted to the Macon Peaches umpiring team in 1929. They were an affiliate of the Brooklyn Robins (who later became the Brooklyn Dodgers). The Depression had ended his dream but not his enthusiasm for the game.

My mother would take me with her on the bus to visit him almost every week, and every visit during the spring and summer would mean Grandpa and I would sit together and watch the Brooklyn Dodger’s game. He would often criticize what he called sloppy umpiring and explain all the tiny details of game management and who the players were. I would constantly ask questions and chatter about the game with great delight and engagement. (In case you are wondering, my mother and grandmother were delighted with this arrangement as they knew neither of us would get into any trouble for two to three hours.)

There were frequently times, though, when he would tell me to be quiet and “just listen to what Scully is saying.” Vin Scully had joined the Dodger’s broadcasting team in 1950 and became the principal announcer in 1953 when Red Barber, the previous announcer, left to join the New York Yankees. (For grandpa that was only marginally less criminal than treason.)

Baseball is a game with long intervals where nothing seems to be happening interspersed with moments of high drama. It’s just made for conversation about personalities, quirks of the players, coaches and umpires and – plain and simple – storytelling. Scully had a knack for that kind of friendly relationship that made me (and millions of others) feel like we were personal friends. At the same time, he would happily break off in mid-sentence when something exciting was happening on the field. Sometimes, in moments of high drama, he would know when the crack of the bat and the roar of the crowd was all the comment that was needed.

By the time I reached my tenth birthday, I had become a rabid Dodger fan and tried to listen to as many games as my parents would allow, making notes of the cool things that Scully talked about so that I could share them with grandpa the next time I saw him. In 1955 the Dodgers finally beat the Yankees in the world series championship after four consecutive losses in prior years. When the last Yankee batter hit a short fly ball to right field, Scully calmly said, “The Brooklyn Dodgers are the champions of the world!”, then said nothing more for a full minute while we just listened to the roar of the crowd. Grandpa and I celebrated that victory with ice cream sundaes!

In 1958 the Dodgers announced they were moving to Los Angeles and would build a fantastic new stadium in Chavez Ravine, a small area in the foothills near Los Angeles. More importantly, it was only 40 Km from my home! Sadly, grandpa died before the stadium could be completed. I took his spirit with me, though, to every game I attended.

1962 was the year I started college at UCLA, got my driver’s license, and became the responsible owner of a 1950 Buick. Even though I had to pay for my own gas and repairs, I drove regularly to Dodger stadium to enjoy the games.

Transistor radios had become reasonably priced and widely available by the early sixties, so Vin Scully always went with me – and made Grandpa’s absence a little more bearable. I wasn’t the only one, by the way, who listened to Scully during the game. There were actually so many transistor radios tuned to Scully’s play-by-play that the sound engineers often had difficulty compensating for the reverberation of his voice.

One of my favorite players was Don Drysdale. He was one of the most dominating pitchers to ever play the game. In the beginning it was primarily because he had graduated ten years earlier from the same high school that I was then attending. As I followed him in his early seasons, though, I was simply amazed by his pitching ability combined with a remarkable batting average. Scully captured the amazement of all of us when Drysdale was selected as a pitch hitter in a critical moment – and delivered with a double!

Another favorite was Sandy Koufax, a remarkable left-handed pitcher who pitched four games in which the opposite team was not able to get a single hit. The last one, in 1965, was a so-called perfect game because no one from the opposing team was even able to reach first base.

That play-by-play was Scully at his best. When the ninth inning started, he named every Dodger player on the field, saying “You should know the men that Koufax will depend on to ensure his perfection.” After the second out: “You can almost taste the pressure now. There are 29 thousand people in the ball park and a million butterflies.” After the final out, he said nothing for a long time, again just letting the roar of the crowd say it all.

When it was announced that Vin Scully would receive one of the Medal of Freedom awards, I was ecstatic. Watching the presentation felt almost like it was being given to one of my own family members.

Scully had broadcast Dodger games for 67 years when he finally decided to retire. These were his closing words at the end of his final game: “You and I have been friends for a long time. But I know in my heart that I’ve always needed you more than you’ve ever needed me. God give you for every storm, a rainbow. For every tear, a smile. For every care, a promise and a blessing in each trial. For every problem life sends, a faithful friend to share.”

Vin Scully, you have been that faithful friend throughout my life and I will miss your golden voice. Rest in peace, dear friend.

Photo at the top of this post taken by Mark J. Terrill