A Night at Lake Dillon 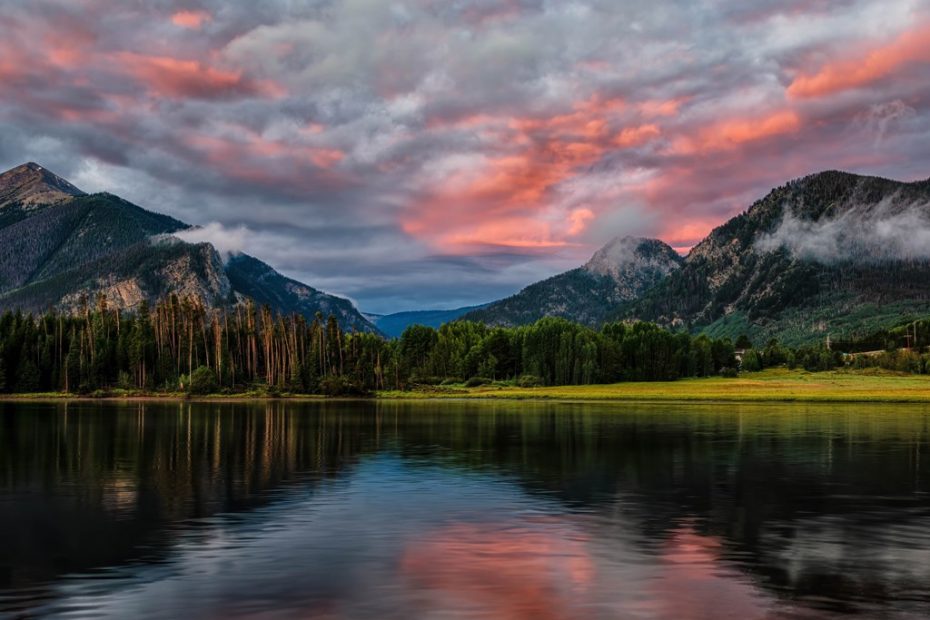 Lake Dillon was less than an hour and a half drive from our home in Denver. It was always dotted with sailboats tacking back and forth against the westerly winds or running with full sails back toward the docks of the marina. It looked like a lot of fun, so I decided to take sailing lessons, buy a sailboat and join the regatta.

My timing in such matters has always been terrible. Immediately after the purchase, Colorado began suffering through one of its severe drought periods. Because Lake Dillon was a reservoir, they were required to release enough water to prevent the Colorado River level from falling below a legally set minimum. The result was that the water level of the lake fell steadily through the summer.

By fall, the docks had to be extended more than 200 meters to reach the water. What had been a beautiful shoreline was now a series of  jagged, rocky peninsulas. This delighted the fishermen, who now had easy access to the deeper waters and larger trout in the lake, but for a newbie sailor it was more of a challenge than I had bargained for.

When the docks closed with the approach of winter, I felt really discouraged and seriously considered selling the sailboat the following spring. However, the first snowstorm came in early November, followed soon by another, and then another. By the first of December, the evening newscasts were filled with images showing the earliest opening of the ski slopes in the last fifteen years.  The frequent snowstorms continued all the way through the end of March, followed by a very sudden arrival of the warm weather of spring. When I returned to my sailboat in mid-May, the  record snowfalls had created so much runoff that the lake was filled to capacity.

The transformation was astonishing. The surface area of the lake had more than doubled and the warm sun had brought out all the splendor of nature in endless swatches of color from all the flowering trees, shrubs and wildflowers. Those rocky peninsulas that had so terrified me the previous fall had been reduced to little, mysterious islands that were now only accessible by boat and – since almost no one saw any reason to go there – perfect places for a quiet lunch away from all the human hustle and bustle of the surrounding resorts.

It was such a glorious summer. I happily polished my sailing skills and explored every part of the lake, sometimes with my kids and dog but often completely, utterly alone. It remained warm well into September and the shortening days inspired me to suggest a grand adventure to the kids: “How would you like to spend the night camping out on one of those islands?” I’m sure the neighbors wondered what the loud, excited yelling and dog barking in my house was all about.

We all loaded all of our camping gear and supplies into the car the following Friday afternoon and headed off to the Lake. The driver (me) was asked at least once a minute about when we would get to our camping site – which was answered with, “That depends on how much help I get from the crew!” The result was a truly amazing demonstration of the power of motivation. We got everything transferred from the car to the sailboat in record time.

It was dusk when we left the dock and dark before we reached our destination. Well, not really dark, because the moon was almost full and there wasn’t a cloud to be seen in the sky anywhere. Although that wasn’t enough to make out any details of the shore or even to see our island destination, by this time I knew Dillon like the back of my hand and chose our direction by memory.

The kids couldn’t decide whether they were more scared than excited or the other way around, so they all sat on the bow of the boat – chattering, laughing and staring at whatever might be ahead of us. There wasn’t a lot of wind, but there was enough to keep us moving at a good pace. The water lapped against the side of the boat, then spread out in waves of ripples behind us, reflecting the moonlight in glistening sparkles as though from a wake of diamonds.

We arrived at the island and I carefully sailed the boat gently up onto the sandy edge, securing it with the anchor rope to a nearby tree. The kids bounced off the boat, each with a flashlight, and dashed around the little island. Hooting with excitement and discovery, they did their best to scare the living daylights out of each other at every opportunity.

I pitched the tent, lit the oil lantern and started a fire. It wasn’t the most nutritious meal for sure, but that night I didn’t care. What could be better than wieners roasted over  an open campfire, then dumped into hot dog buns and slathered with pickles, onions and mustard and with a generous side dish of baked beans? Of course, no campout worth its name would be complete without an endless supply of marshmallows, toasted to a golden brown (or flamed to black in some cases).

We sat around the dying fire for the longest time as I told every ghost story I could remember, improvising something sinister in the story to explain every little nighttime noise that we were hearing. The kids just loved it and it was such a magical time for me as well. Two of them fell asleep right on the ground and had to be carried into the tent. My daughter and I just sat next to each other for long time, saying nothing, staring at the moon and enjoying the night. Then we both climbed into the tent and fell into a dreamless sleep.

It was such a different place in the morning light. Still beautiful, still fun to run around and explore again, but the magic had been chased away by the sunlight – into our memories, never to be forgotten.