A Tribute To My Grandfather 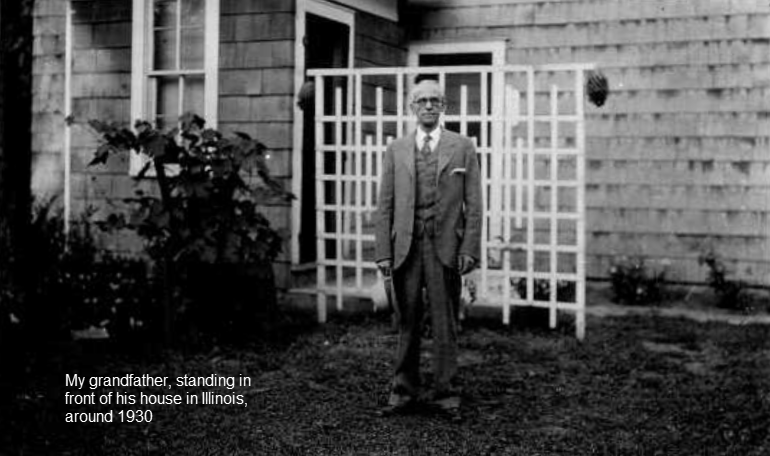 When I was young, the idea of old age seemed so foreign and abstract. Oh sure, I spent enough time with my Grandfather to realize that human beings did age and their skin would grow wrinkly, but the idea that that could be me someday just didn’t have any reality.

I didn’t have very much contact with other older people and my grandfather would work all day in his orchard then go for long evening walks after dinner. My father would often say, after helping his father for several hours, that he could not keep up with him.

So old age didn’t seem to matter very much – certainly not when compared with all the excitement and potential that each new day would bring. No sleeping in for my grandfather! When the sun went down he would take time to smoke his pipe before turning in to bed. Even so, he never rushed, never acted like going to bed early was some kind of virtue – it was just the thing you did to acknowledge the day was done.

Grandfather’s wife was named Sarah. This was his second marriage and it seemed like it had just been a matter of expediency when my father’s mother had died. My grandfather was a conductor for the Illinois Central Railroad and was away from home for extended periods of time and my father was only ten years old at the time. He simply needed someone to look after his house and take care of my father. I have no idea what her family story was – it was never discussed in my presence – so I assume she agreed so as to not have to face a life of spinsterhood. In any event, she was despised by both my father and my mother and largely ignored by my grandfather. By the time I was in their world, Sarah was a bitter, cranky old woman who seemed to spend her day moaning and complaining about how awful and unfair life was.

My parents would sometimes go to a party or movie and decide I should spend the night with my grandparents. I was never very happy about having to be around Sarah but I loved the time with my Grandfather. Although my father constantly talked about how his father was never  satisfied with anything he did, Grandfather was almost always very indulgent with me and spent many hours sitting on a bench in his front yard, reading the newspaper, and talking about the stock market and the news.

I particularly enjoyed his evening ritual with his pipe. He bought tobacco in large 2.5 pound, dark-blue tins with the brand name printed in large gold letters: Granger Tobacco. He would pound his pipe in a big ashtray to knock out any possible remaining ash, then carefully take a pipe cleaner out of a yellow package and carefully clean out the stem. By this time Sarah would be loudly complaining about the racket and the awful stench of the tobacco but, for my grandfather, it registered no more than the noise of traffic from the street outside. He would take a small pinch of tobacco and press it carefully into the bottom of the pipe bowl, then add small additional layers until it was filled to the top. “Smokes better” he would answer, should I ask him why he didn’t just take a big bunch of tobacco and stuff it in all at once. Then he would strike a long wooden match, wait until the flare of flame from the phosphorus tip had died down, then touch it in a circular pattern to the exposed tobacco, puffing increasingly dense clouds of smoke as the lighting process advanced, each puff illuminated by a momentary larger flame from the match. Fully lit, he would sit back and puff contentedly while he read the afternoon paper or chatted with me after Sarah had flounced out of the room.

When the pipe was done, he would pound it out in the ash tray again, then announce it was time for us to go to bed. The next morning, he would be up with the sun and working in his orchard by the time I got my eyes open and stumbled out of bed. I really liked his idea of seeing each new day as a treasure chest – but decided that the day’s potential could still be realized a little later in the morning!

Sarah died when I was around nine years old. My family went through the usual funeral rituals, but I had only a sense of everyone just being relieved. The idea of death was quite foreign to me at the time, but so was my Grandfather’s seeming indifference. I never managed to find the courage to ask him about his reaction or whether he felt at all lonely – I doubt that he would have shared anything with me in any event.

Grandfather always put whatever fruit or vegetables he had harvested in large baskets and walked around the neighborhood, offering them for sale to other families. It didn’t matter whether it was really hot or cold, raining or dry – that’s just what you did in the mornings. When I was around fifteen, he set off on his round in cold, rainy, windy weather. The next day he developed a fever and then pneumonia. Less than a year later, he was dead. Still, I had to think he had truly realized at least some of the potential of a human life. I still miss him.