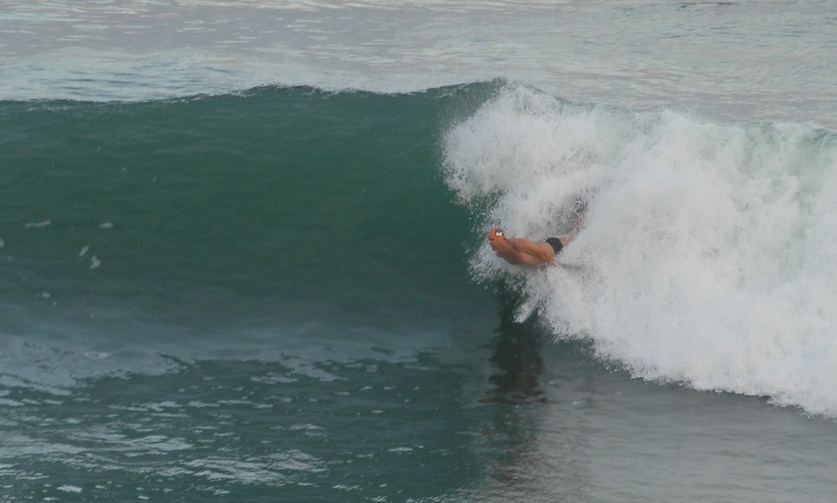 I was sitting at the window today, watching the snow falling in my backyard. I was feeling a bit sorry for myself because the Covid pandemic has put on hold so many of the activities I love to be involved in. For some reason, I started thinking about one afternoon from my university days at UCLA.

It was one of those typical, late-summer days in southern California when the sun was no longer directly overhead but more to the south. It was late afternoon, the shadows were stretching out, and the temperature of the beach sand had become tolerable on bare feet. The ocean was still warm and inviting, seducing me to ignore the approaching end of the day and remain just a little longer.

I had been out in the water since early morning and my fingers were wrinkled and white almost beyond recognition, especially when I looked at them against the skin of my forearms, dark bronze from a summer on the beach and in the water. I loved the exhilaration of body surfing, watching for the approach of the next wave, swimming furiously to gain enough speed so the wave wouldn’t just pass me by and then sliding effortlessly along the crest of the wave almost to the shore followed by being abruptly dumped on the rough, hard wet sand as the wave receded, leaving me like a stranded whale but laughing and filled with the joy and careless unconcern about tomorrow of almost every teenager.

The waves had gotten higher during the day and started breaking further and further out from the shore. The salt water gave me just enough buoyancy that I could easily tread water and so could wait there for the next wave, but hanging there vertically meant that it was much more difficult to get to the horizontal position necessary to surf the wave. Despite several attempts, I only managed to get suddenly buoyed higher as though I were on a roller coaster and then fall just as suddenly as the wave moved on, leaving me to watch it, longingly, as it crashed magnificently on the beach.

Realizing that I was being too slow to get started, I started swimming when the wave was further away, but timing is everything in body surfing and I found I was often ahead of the wave and would again miss the ride. Then I saw a really big swell coming, one that hid not only the horizon but a significant part of the sky as well. This is the one, I thought and started to swim as fast as I could.

I timed it perfectly. I knew immediately it was one of the biggest waves of the afternoon and felt the amazing acceleration as the crest of the wave lifted me up and began to drive me forward. Faster, faster, I said to myself and continued to swim with all my strength. Then a strange thing happened. There was no longer any water under my head and shoulders because, in my enthusiasm, I had swum over the crest of the wave. There was nothing more to be done other than to look down at the water below the cresting wave. It felt like it was a huge chasm, although in truth it was probably less than a meter.

Down into the trough I fell and the wave crashed over me, tossing me and turning me in impossible ways. Could I hold my breath long enough? Was something terrible about to happen? I panicked and begun struggling to reach the surface and was totally shocked when my mad stroking struck the sand on the bottom. I just relaxed at that point and gave myself to the ocean and whatever it was going to do with me.

In a few seconds that seemed to last forever, it delivered me back to the surface, gasping for air. Then I became aware of the most beautiful sunset I have ever known. The red-orange glow of the setting sun had lent its colors to every cloud and jet contrail in the sky and gleamed through the palm trees above the beach behind me.

Logic would say it was the same sunset I had looked at before surfing that big wave, but in truth I knew that I was seeing something I had never seen before. I had never, ever been in this place in this moment – nor would it ever come again.

My mind returned to the present and the view out my window – the snow, the cold, the leafless trees – and my heart was again filled with gratitude for the precious gift of life, right here, right now.

2 thoughts on “Be Here Now”