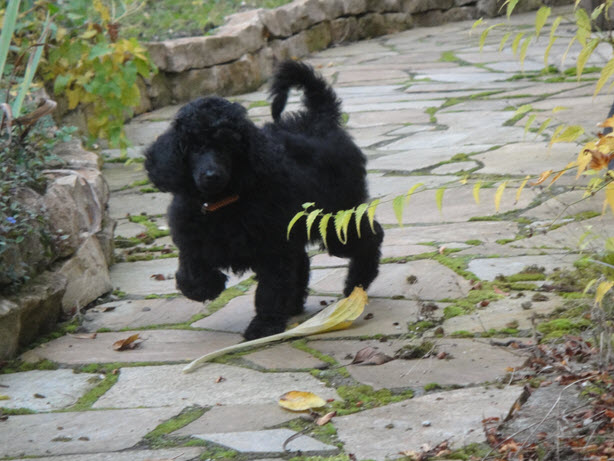 When I retired, ending several decades of extensive travel, my wife and I could finally think about having a pet dog again. A poodle breeder wrote that she had one adorable, black puppy left. However, when we arrived at her home to see the little one, she surprised us by also bringing in a litter-mate who immediately began busily explored everything in the room. When I sat down on the floor with the other puppy, she ran over to me, crawled onto my lap and pushed the first puppy aside. Putting her front paws on my chest, she stared at me with such soft, chocolate brown eyes that I felt like I was melting inside. Looking at my wife, I whispered, “I think I have just been chosen.” With her smiling agreement this incredibly soft, fluffy, curious bundle of affection became our newest family member. We named her Lilly after a favorite aunt.

Since my wife was still working, much of the day-to-day care of Lilly fell to me – feeding four times a day, taking her for frequent walks to do her business (and cleaning up the inevitable accidents inside), and beginning her training with what behavior was, and was not, allowed. My well-ordered life, where tasks were promptly completed and seldom procrastinated, came to an end. The day would be over and I would notice unopened mail on the table, unpaid bills on my desk, and unanswered e-mail in my inbox. Expecting some resentment over this disruption, I was startled to discover that I had little concern about it.

In fact, I was finding great joy in the preparation of her food, bathing her, and taking her for long walks. It was especially on these walks that she began to teach me to see the world with new eyes. While I tried to avoid the muddy puddles after a rainstorm, she found great joy in prancing through them, experiencing the wetness and cold. While I paid little attention to the dry, fall leaves that were blowing around, she bounded after them with wild enthusiasm. While I got lost in my own thoughts, she focused totally on the blade of grass or rotted branch that was now before her eyes and nose.

When I talked to her, it didn’t matter that she had no clue what I was saying. She just gave me her full attention while slowly wagging her tail like a semaphore – wag, wag, (pause), wag, wag. At home, she would lie on her back in my lap, head draped over the crook of my arm, all four legs in the air, just waiting for a belly rub. It was so soul-satisfying to sense her total trust, feel her body warmth, caress her soft fur, and bury my nose there to smell her.

My rather intense sensual connection with her seemed a little strange to me until the day a new mother sat in the seat opposite me on the train. When she held her nine-month old daughter close to her chest, began talking to her and sniffing her hair, I realized that my relationship with Lilly might be giving me a glimpse of what it is like to be a mother.

Recently I found yet another pile of shag threads that Lilly had once more pulled out of a throw rug next to our bed. Lilly had followed me into the bedroom. When I angrily turned and stared at her, she crouched down in an anxious way. I wanted to vent my frustration but instead just stood there and looked at her. I realized she would be incapable of connecting my anger with her misdeed and that she had just been entertaining herself according to her own doggy nature. My anger and frustration shifted into a resolution to respect that doggy nature by remembering to keep the bedroom door closed.

I had had great affection for all of the dogs that had been part of my life before, but for the first time I have allowed this bond of love to change me. This little black, furry bundle of affection is helping me to more deeply understand true love: calmness, acceptance and respect for the unique nature of others. I resolve to bring this new insight to my relationship with my wife, my children, my family and my friends.