Fishing With My Father 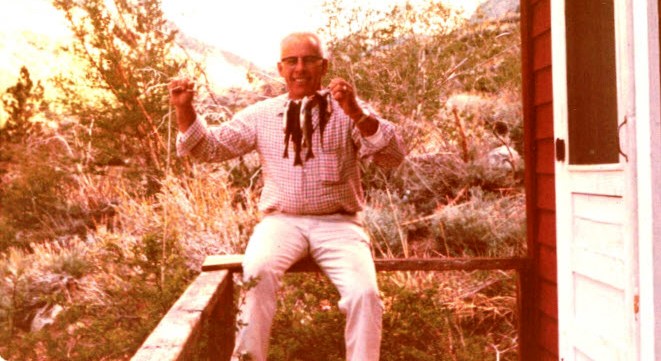 One of the things that my father always tried to teach me was the core principles of doing a quality job: have the right tools, know what you don’t know, be organized, and never be satisfied with less than your best.

If you were assembling a cabinet, a BBQ or a wheelbarrow, for example, being organized meant always reading directions through from start to finish and lay out all the provided parts before actually starting the work. I still follow his guideline to this day and, despite the fact that he died nearly thirty years ago, I always have the sense that he has come for a little “visit” and is looking over my shoulder as I assemble or repair something.

What I really didn’t understand was how I could recognize when it wasn’t about the quality of the end result.  There were only rarely circumstances where he could let go of that himself. One of those was when we went fishing. He seemed to transform into someone else when we reached the edge of the lake or the stream where we would try our luck with the wily trout – relaxed, totally in the moment and more fully alive than he ever seemed to be at home.

I can remember only one time when we went ocean fishing. He agreed only because a friend of my father invited us to spend a couple of days on his boat off the coast of Santa Barbara. It was to the small streams and lakes of the Sierra Nevadas above the sleepy little town of Bishop in east-central California where we headed every summer for two or three weeks.

I don’t think he ever saw fishing as something that was measured by how many fish you caught. As for me, I measured the day’s success by the number of fish I had in my pouch, and complete triumph meant that I had caught ten fish, the daily limit.

Lake fishing was different than stream fishing and was much too passive for my taste. You just put an egg on your hook, tossed it as far out into the lake as you could, then sat passively waiting for the bobber to suddenly jerk down below the water. There was one time, though, when the reservoir lake had been substantially drawn down to provide water to the farmers in the desert around Bishop.

We sat on top of a smooth, rounded rock a couple of meters above the water’s surface and one could see fish from time to time swimming below us. Dad put a worm on his hook and dangled it into the water, watching the fish eye it suspiciously but hungrily.

When one would approach, he would lift it slightly and vastly enjoyed the approach-avoidance conflict he thereby created in the fish. He laughed, smoked cigarettes and completely forgot about the rest of the world. Finally, after a least an hour, the fish seemed to be unable to resist the temptation and swallowed the bait. My father shouted with joy and triumph and his huge smile would make you think he had just won a million dollar lottery. I think it was the only fish he caught that day but it was still a full, complete and satisfying day for him.

Stream fishing was another matter entirely. He bought wading boots for both of us when I was ten years old and we carefully waded down the small stream together. He would point out fallen tree branches, rocks around which the waters swirled, and deeply undercut banks where the stream cut sharply left or right. In a quiet, conspiratorial voice he would tell me that that was the sort of place the trout would hang out. An egg or worm would be placed on the hook and carefully floated downstream to the place of the secret hideout.

If we were lucky, a trout would suddenly strike the floating bait and then dash out into the full fury of the rapidly flowing stream, desperately striving to escape this sudden intrusion into his world. It’s fierce, strong resistance would seem like it must be a massive fish. I never failed to be amazed that, when we finally brought him into the net, he was no more than 18-20 cm. Still, it was a shared triumph of man over nature and we celebrated together.

I think I was 13 before my father would allow me to go out fishing alone. I’ll never forget the morning I successfully caught a trout completely on my own, following his lessons. It was the most wonderful graduation ceremony I ever experienced. I went running back to the cabin, the fish still hanging on the line, shouting that I had caught a fish. Dad came out of the door, looked at me with a big smile, and clapped me on the shoulder. It was one of the few times I ever got unrestrained praise for something I had accomplished. It was decades before I began to realize that his praise had not been about catching a fish but rather about my willingness to take the risk of returning home without a fish – and to have had a magnificent morning in any event. I’m still working on that lesson today.

6 thoughts on “Fishing With My Father”