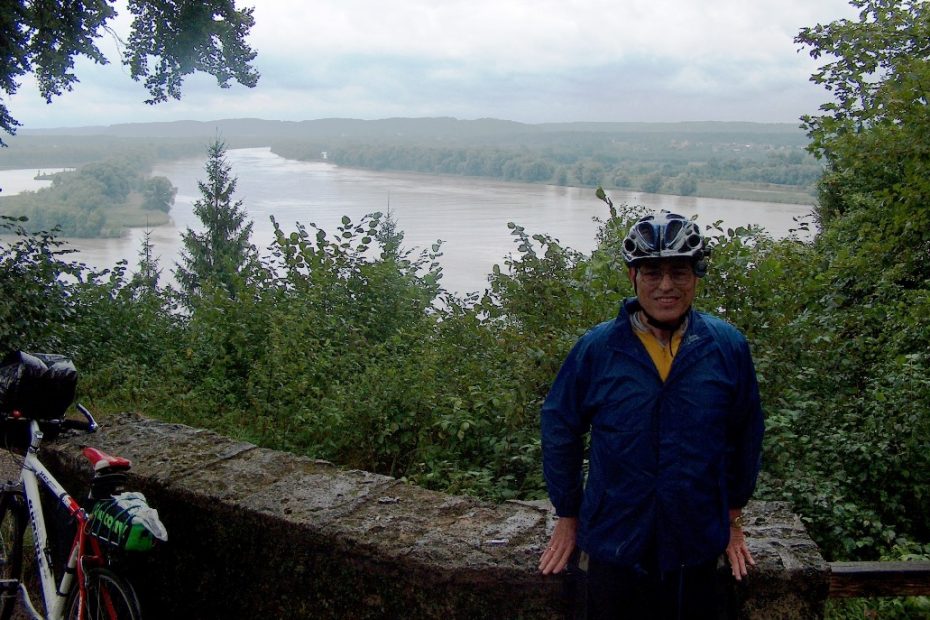 I’m not really sure why I decided I wanted to do a long bike tour by myself. We had been living in Germany for nearly five years and I had really enjoyed cycling. I just love the many long, well-cared for biking trails that run through some of the most spectacular mountain and forest scenery that I have ever seen. I had done several long day trips, sometimes approaching 100 Km, and decided in the Spring of 2005 to ride the entire length of the Inn river to its destination at Passau where it emptied into the Donau, then follow the Donau to Deggendorf before turning south along the Isar to return home.

I picked a mid-August week when my work schedule was always light so that I would have enough time for my tour. When departure day arrived, the idea of checking on the weather forecast simply never occurred to me. It was a beautiful, sunny day when I set out, feeling a glorious sense of freedom and being part of the great adventure of life.

By the time I arrived at Wasserburg am Inn, the sun had disappeared behind dark clouds and the wind had become gusty – all warning signs of a brewing storm blowing in from the west. “So what if it rains a bit,” I thought to myself as I made my way through the twists and turns to get past Wasserburg and started the climb from near the river surface to a higher cliff with a spectacular view of the river. I had biked as far as Wasserburg several times before, but this was the first time I had biked further east, so it felt like the “real” start of my grand adventure.

And it was indeed an adventure. The nice, paved bike-way ended within a few kilometers and was replaced by a rutted, rocky dirt road. Because the bike path frequently turned away from the river and there were frequently several choices where other paths would join it, it was sometimes less than clear which direction was the right choice.

As I kept riding, it continued to grow darker with the rain coming down with increasing authority – first just a few big drops that banged noisily against my helmet like some kid first learning how to play a snare drum – then more drops, faster, streaking my glasses and touching my thighs with cold and wet as they penetrated my riding shorts.

By the time I got to Mühldorf, it was an unremitting downpour. It would have been a good time to have acknowledged that nature wasn’t going to cooperate with my plan and looked for a place to spend the night there, but I demonstrated once more my capacity to substitute my wishes for the reality of the coming storm. My schedule for this ambitious week of cycling called for me to reach Simbach am Inn by the end of the first day and, by golly, I wasn’t going to let a little rain disrupt my schedule!

As I continued on, I noticed that, in places, the bike path had been built very close to the surface of the river. Strange, I thought. Why wouldn’t they have built the path a little higher above the river, given that the banks rose rather steeply on both sides? The idea that the path had been built well above the river and that it was the Inn that was now rapidly rising simply never occurred to me.

Obviously, there is a limit to how long one can deny reality so long. The Inn delivered the face slap of “wake up, stupid” a few kilometers after I passed the little village of Marktl. The river makes a broad turn to the east here at the border with Austria and the bike path simply disappeared under the surface of the river. Now I was the one who had to climb up the rather steep mountain road to higher ground.

At this point, I had no realistic alternative to Simbach am Inn for an overnight stay. There was now no choice except to set the bike at its lowest gear and begin the climb – which was so steep that I could never managing more than 8 or 9 Km/hr.

Mother Nature seem to want to be sure the lesson was clear: you take her on only at your own peril. If I thought it had been raining hard before, it was a trickle compared to the downpour that now intensified to a level that I have rarely, if ever, experienced before or since. The rain was so dense that I literally could not see more than 10 to 15 meters in front of me and the visor on my helmet had transformed into a rain gutter that was pouring waterfalls onto my lap and legs.

I would see passengers in the occasional car that passed me staring opened-mouthed at this idiot out riding his bike. It wasn’t hard to imagine the conversations that the sight inspired among the occupants.

When I finally made it to the first hotel in Simbach, complete with a sign saying “Welcome bicyclers”, I headed straight for the check-in desk, leaving my own little river on the linoleum and carpet and humbly asked if they had a room free for the night. A little wide-eyed, the clerk simply handed me the keys and announced the room number. I asked if I didn’t need to fill out a registration form. She looked briefly and the lake forming on the floor around my shoes and assured me that I could complete the form later or perhaps at breakfast.

I didn’t look to see if they took down the sign “Welcome bicyclers” as I headed off the next morning!

I stayed well away from the river as I made my way to Passau even though the sun had come out and it was a beautiful day. Naively assuming there would be no problem finding a room to stay in there, I was rather shocked to find that most of the hotels were sold out – because all the rooms on the lower two or three floors were under water! Fortunately one manager took pity on me and let me have a room on the condition that I would be out by 9 the next morning so they could get it ready for a guest whose arrival had been delayed by a day – because of the flood!

2 thoughts on “Lessons Learned From Cycling”