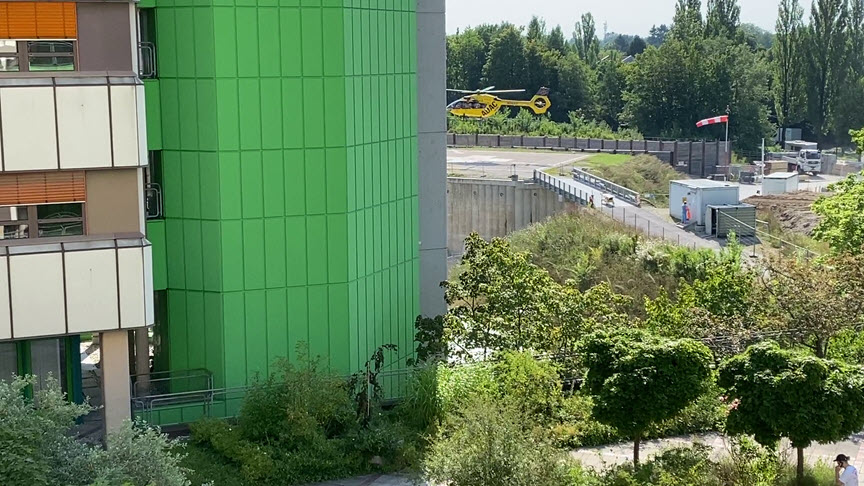 It’s a good thing we can’t see into the future, I guess. The second of August started pretty much like any other Monday with a good breakfast, a walk with Lilly and plans to finish my next post about my bike trip with my good friend Bogdan. I noticed a rather sudden, sharp pain in my abdomen shortly after lunch that got progressively worse as the afternoon progressed.

By early evening my abdomen was swollen with gas and it was clear that something was seriously wrong. Susan drove me to the hospital emergency room. Unfortunately the receptionist sent me to the Bereitschafspraxis (standby doctors’ practice) rather than asking me to wait for an available emergency room doctor.

The doctor there did no diagnostic tests whatsoever –  just noted the extreme swelling and gas in my abdomen, decided it was food poisoning and sent me home. It was a disastrous mistake because the pain was in fact caused by a twisting of my small intestine that had cut off the blood flow. I was in real agony the entire night and, by morning, that part of my bowl had died and my physical condition had deteriorated to the point that I could no longer walk and had little idea of what was going on around me. My blood pressure had fallen so drastically that, when I tried to stand up, I lost consciousness and suffered further injury from the fall.

Susan called the emergency medical service and they arrived within a short time. After a brief examination, they decided the situation was serious enough that I should be flown by helicopter to a major hospital in Munich (I took the above picture ten days later of the arrival of a different emergency helicopter at the hospital). But just imagine: Susan had no idea what was happening from the time I was carried on a stretcher to the ambulance waiting in the driveway around nine in the morning until sometime after six PM when she was able to reach one of the post-op nurses in the ICU. The nurse could only tell her that I was out of surgery and doing OK. It was another two hours before a different nurse called and let her actually talk to me. I just can’t get my head around the horror of those nine hours when she had no idea whether I was alive or dead.

The first night in the hospital was like nothing I have ever experienced before. Tubes coming out of almost every orifice, needles in my neck and arm, drainage bags and painful swelling and gas in my belly that led to constant vomiting. A nurse, with a Polish accent to her German, seemed to have no sense of patient empathy at all. She seemed to return every five minutes, ordering me to turn this way and do that thing – it was like being in boot camp.

And then there was Monika. I never learned her last name, but she had fastened a clothespin to her blouse that had her first name on it. She made sure I knew her name and had a way of speaking about what I was dealing with that was so gentle and understanding – “I know it’s really hard right now, but you are going to get through this.” I think it must have been around two or three in the morning, and she was like a visiting angel. I managed to relax a bit after that and to sleep fitfully until the doctors came in for their morning rounds some time the next morning.

When you are confined to your bed for an extended period of time like I was, you have a lot of time to reflect on things and to meditate. I began to focus on the hospital personnel as they came in and out of my room for one reason or another. I also had lots of time to reflect on Saint Francis’ prayer – to make it my priority to understand others rather than getting others to understand me; to forgive rather than to seek to be forgiven; to be a source of light where there is darkness, joy where there is sadness, and hope where there is despair.

I understood more clearly than I ever have before that the only price I must pay to forgive and let go is my own wounded ego when I think I have been wronged or somebody should apologize for whatever thing may have happened. As the days in the hospital went by, I had so many opportunities for short-term interactions with the hospital staff as they came into my room for one reason or another.

Over and over again I experienced the transformation in them when I found some little way to connect with them as human beings and acknowledge their struggles – and was rewarded with smiles and, often, completely changed body posture and language.

So what about that doctor in the Bereitschafspraxis who made that horrible mistake? Could I forgive her for all my unnecessary suffering and stress that might have been avoided if she had simply done her job? That one was tough.

It was clear that holding on to my anger and resentment would only take away the energy and focus on what I needed to do to get back to my life – and there was a long road ahead of me.

The deterioration in my physical capacity was very evident. I tried to walk a bit each day in the hospital, setting as a goal a visitors’ rest station in one wing or another on the same floor. They were not more than three or four hundred meters away but I felt like I had just done a 10K race by the time I got there.

When the day finally came when I could be discharged from the hospital, I managed to pack up all my things and be waiting when Susan arrived. In order to get to the “convenient” place where she had been allowed to park we had to take an elevator to a basement floor, then follow a winding route past equipment storage rooms, MRI, X-Ray and other imaging equipment rooms and eventually out to a bridge walkway leading to the parking area. Needless to say, it was considerably more than 300 meters and rest stops were necessary. The car seat embraced my exhausted body as Susan drove us home.

I was greeted at the door by my wildly excited dog, Lilly. I hadn’t thought too much before about how stressful it must have been for her to have experienced the intense emotions as I had been taken from the house on a stretcher eleven days earlier and then not seen me for such a long time. There was lots of whimpers and yelps of joy that made for a nice welcome.

The next few days were a real struggle. The kinds of food I could eat were really limited and I was constantly feeling exhausted, needing to sleep twelve hours a day or more. To just walk to the end of my driveway and back a couple of times was all that I could manage at first. When that seemed more manageable, I tried walking – slowly – to the end of my block. I would be completely out of breath before I was half-way there. Even more discouraging, I would feel like I had managed a little better one day only to have the same route feel much more difficult the next day.

The adage “Do what you can, more is not possible” went through my head a lot during those first couple of weeks. I began to gain a much fuller appreciation for patience and to focus on the longer-range view rather than my struggles at any given moment. On a follow-up visit to the medical practice where my regular doctor was on vacation, I complained to the substitute doctor about how much I was still struggling with frustration over my lack of physical fitness. She said, “Remember that your operation was only at the beginning of July – recovery does take time.” When I said that my operation was actually at the beginning of August, she just looked at me in amazement, commenting that, in that case, my speed of recovery was truly exceptional.

So I have been doing what I can, trying to do a bit more each day, and to accept that what I have managed is good enough. Recently I’ve been able to enjoy cycling and am back to normal walks again. My cardiovascular level in the gym is pretty much back to where it was before. If I’m honest, I’m probably actually doing better than before because of all the weight I lost – 15 Kg. Still, not a recommended diet strategy.

And what about forgiving the catastrophic error of that Bereitschafspraxis doctor? That has been the longest and toughest element of my recovery. In chatting with a neighbor I found out he had had a similar experience a couple of years ago with sudden, severe abdominal pain. He went to his private doctor who did a sonogram, recognized the seriousness of the situation and sent him immediately to the hospital. There, over the course of three days or so, they were able to untangle his twisted bowel with massage and avoid surgery altogether. It didn’t help my forgiveness task to discover that, with proper diagnosis, my surgery could perhaps have also been avoided.

I decided that the responsible thing would be to provide feedback about the mistake so that a future patient with sudden, unexplained abdominal pain would not be quickly sent home without careful diagnosis. I wrote a long letter to the chief physician at the Ebersberg hospital describing what had happened and the consequences that had for me.

What I found out was profoundly disturbing – the hospital was not responsible for the doctors who worked in the Bereitschafspraxis. It was managed by an independent group and some of the doctors who worked there were simply not qualified to deal with serious issues. This also meant that there was no easy way to find out the name of the doctor that saw me. So what was the point of holding on to my anger? It would only hurt me and my ability to be present to my family and my life.

I would much have preferred to have avoided the whole hospital experience – yet I learned some lessons there that will enrich my life for the rest of my days. Life is grand and I am savoring every moment more intensely than before, and that is a good thing.

3 thoughts on “My Hospital Adventure”