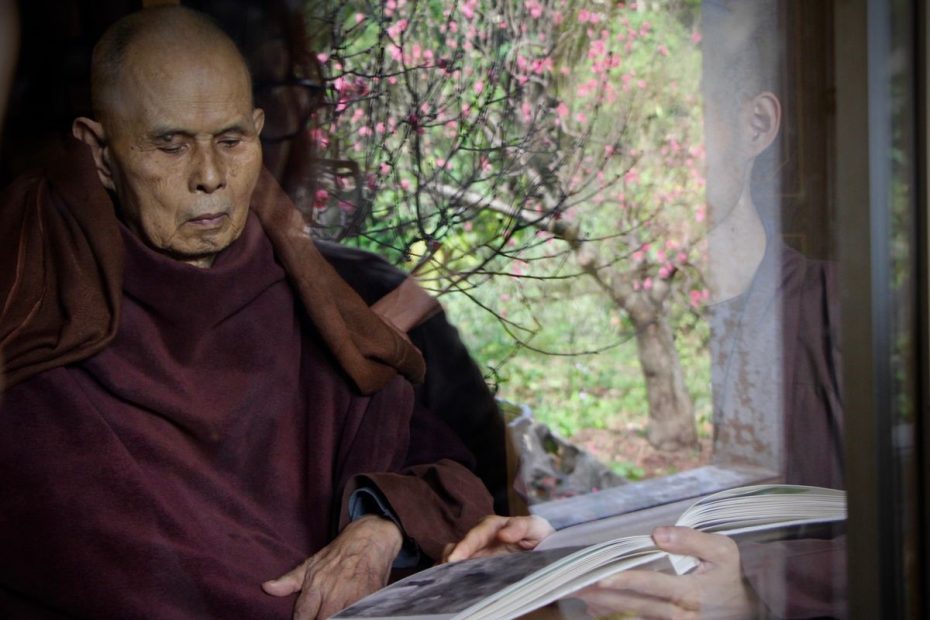 Thích Nhất Hạhn, a Vietnamese Buddhist monk, peace activist, prolific author, poet, teacher, and founder of the Plum Village, died three weeks ago at the age of 95. He was known as the “father of mindfulness” and is often considered to be one of the main inspirations for engaged Buddhism. He was always referred to simply as “Thay” (Vietnamese for “teacher”, pronounced Tie-ee).

When I learned of his death, I felt a profound sense of sorrow and loss. He had suffered a severe stroke in 2014 which left him unable to speak for the rest of his life. I would imagine that his inability to continue his travels and teaching must have been difficult, so I also had a sense of gratitude that he had been released from his physical limitations. Yet, even as I write this, I can hear his gentle rebuke – “I am not my body. I am to be found in your way of walking and breathing.”

Thay was much more to me than a Buddhist teacher and writer. He gave me the key to laying down my heavy burden of guilt because of my involvement in the Vietnam war and to regaining my joy in being alive. He, along with one of his life-long students, Sister Chân Không, organized a week-long mindfulness retreat in Santa Barbara in the spring of 1997 specifically for Vietnam veterans.

At this retreat I became profoundly aware of how wrong behavior almost never arises out of evil intent but rather from ignorance.  I had been consumed by anger and frustration with myself for nearly 25 years because of my failure to grasp the truth of the Vietnam war while I was in the army. I simply could not forgive myself for all the half-truths and platitudes I had told sorrowing wives, parents and family of service members, such as “[They] died nobly in patriotic service to [their] country.”

About half of the retreat participants were veterans like myself, while the other half were next-of-kin of veterans who had died in Vietnam. We each told our stories and were astonished by the multi-faceted interfaces with the larger events of the time. We listened to Thay twice each day as he promoted deep listening as a nonviolent solution to conflict and helped us become more aware of the interconnectedness of all the elements in nature. We practiced walking meditation with him every day. On the last evening, Santa Barbara residents were invited to come and listen to each of us present something we had prepared about our experiences and what we had learned from Thay and each other. There were hundreds in the auditorium and it was one of the most powerful moments in my entire life.

As my wife and I prepared for our flight home, I realized that after all those years of  self-abuse my inner awareness had transformed into a sense of compassion and sorrow for the anguish and pain of that younger Roger – a necessary consequence of his ignorance. It was an overwhelming relief – but I was to discover that it was only the beginning.

The following September I traveled to Washington DC  to teach a seminar. At the end of the first day, I went jogging  next to the reflecting pond in front of the Lincoln memorial. I stared at the sculpture of Lincoln and reflected on all of the shame, guilt, self-anger and remorse about my participation in the military during Vietnam that had been revealed to me at Thay’s retreat. I had this picture about how I should have been if I hadn’t been so “stupid” and “stubborn” as to not see what was really so. But then I suddenly realized that that this new picture was in fact also limited, deluded and ignorant.

So now what? Should I add yet another layer of guilt and shame because I couldn’t see what took me 24 years to realize? Even through my spiritual clouds and haze I could feel the nonsense of such a notion. But if it was nonsense, what sense could there be in the original guilt trip? I did honestly what my heart told me was right, given the awareness and perspective that I had had at the time. What else could I have done?  My ignorance was my karma, and the consequences of the actions I took followed inexorably from that.

Then the whole thing fell open. The leaders of my country did what they believed was right because their ignorance and fear did not allow them to see anything else. They “knew” that monolithic communism was on the march to ultimately destroy America. Suddenly, all the “lies” I told next of kin about the deaths of their loved ones were in a much more fundamental way deeper truths: they did die for their country and their way of life because at some level or another they saw no alternative but to answer their country’s call to take up arms and defend democracy from communism. And the peace activists who weren’t always peaceful were also constrained by their karma of ignorance, and … on and on and on. We were all dancing this brief dance of life to the only beat we could hear. As Thay put it, no man is our enemy, only greed, hatred and ignorance.

I went to the Vietnam War Memorial the next evening and spent a very long time looking at the bronze soldiers standing guard – their youth, strength and vibrancy captured forever by a loving artist.

I walked slowly down the sloping path along the Vietnam Veterans Memorial. At the beginning, where the names of the first soldiers to die in 1959 were engraved in the black granite, the wall wasn’t even knee high. At the lowest point, the wall of names reached high over my head and reach. I touched the wall in places and read a few names.  I stood for a long time at the end where the names of the last soldiers to die in 1975 were engraved on a wall that was again only knee high. I chanted the name of the first man to die and the name of the last to die over and over again. Their dates of death were sixteen years apart. What a terrible, grotesque set of bookends.

I listened to the fragments of conversations as people walked behind me, all searching for some way to grasp what it might mean. I cried again for all the loss, pain and sadness symbolized by those names, but they were not the wrenching, tortured, agonizing tears from past years of a deep wound laid open again. They were rather quiet sorrow at the immensity of our loss that felt somehow healing and soothing.  There was a quiet, penetrating beauty and dignity in that enormous black slash in the earth.

I continued along the path and came to the Women’s Memorial. One nurse is kneeling, one is looking into the sky at an approaching medivac helicopter, and one is seated, holding a dying soldier in her lap. She presses a bandage to his terrible chest wound with one hand while the other holds his head as she looks into his face.  Do you know what I saw? I saw the Pieta. It was the modern Mary once more holding her dear dead son…..

“Amazing grace, even for a wretch like me; once I was lost, now I am found.”  How many of us are lost, and when we are lost how can we be anything other than wretches?

Not good or bad or should be or shouldn’t be, we are just wandering in the darkness of ignorance and causing immense damage because we can’t see to do anything else. Yet grace is always there for us, and when the light of grace finally touches us, we find God. Or perhaps we disappear enough to make room for God. And if the holy spirit is mindfulness, as Thay says, then we can begin the real work of penetrating our ignorance.

Thank you, dear Thay. I will miss your smiling face even as you are to be found in my way of walking and breathing.