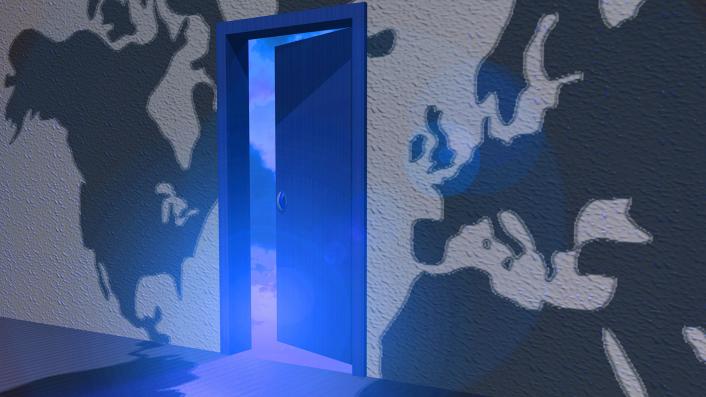 Two teachers at my high school really stood out for me. They would wander around the baseball/football fields together almost every lunch period, enthusiastically talking and gesticulating to each other. One of them, Mr. Fresius, was a white-haired, somewhat overweight, and carelessly dressed man who had taught English for years – decades even.  The other, Mr. Quigley, was the senior history department teacher. To my adolescent eyes, with his gray hair and wrinkled skin, he looked like he could have personally witnessed some of the events that he covered in his classes.

Students rarely saw teachers on campus together during breaks, especially if they were from different departments. Together with their reputations as tough and demanding teachers, they were an inexhaustible source of teenage gossip and rumors.

As it turned out, I ended up in both of their classes during my last semester before graduation.

I had read my first Shakespeare play – Macbeth – in my tenth grade English class. I remember being fascinated by the witches, confused by the interactions between Macbeth and his wife, and frustrated by the  almost incomprehensible English. There never seemed to be time to talk about questions like why Macbeth couldn’t see where the path he was on was taking him. In the eleventh grade, the prescribed play was Hamlet and, again, the teacher didn’t seem to have the time for my endless questions. Toward the end of the year, perhaps in exasperation, she said I should save all my questions for the Shakespeare class that had just been approved for the second semester of senior English. “Mr. Fresius will be delighted to answer them.”

History, on the other hand, had been a fairly boring topic for me. The required classes focused almost exclusively American History and consisted primarily of memorizing dates, names and battles. I had little sense of connection between any of it or with why I should even care. I had had no intention to enroll in Mr. Quigley’s last period history class, but the decision to take the Shakespeare class meant that I had no other alternative.

Mr. Fresius’ class was the last period before lunch. The class was relatively small and I was a little nervous as I watched him handing out our textbooks and writing our first assignments on the board. Then he sat on the corner of his desk and began to talk about Shakespeare, his times and his plays. There was a shine in his eyes and a passion in his voice that just mesmerized me.

“Forget about all the ghosts and incantations,” he loudly insisted, “and look for what Shakespeare can tell you about living your life today!” He then assigned us the first few pages from Romeo and Juliet as our homework for that night. He told us that we would read the script aloud in class the next day, not with assigned roles but just simply going from one student to another on a random basis after a few lines.

We finished the class, gathered up our materials and looked at one other as we filed out of the class. I don’t think anyone thought we actually had homework to do. After all, we already knew how to read, right?

Two hours later I found a seat in Mr. Quigley’s class. After passing out our history textbooks, he asked us to read a couple of pages dealing with the immediate aftermath of the civil war. I scanned through the dates, place names and numbers while I constantly checked my watch to see how much longer it would be before the period would be over.

After twenty minutes or so, Mr. Quigley began his lecture by telling a short story of two brothers from Tennessee, one of whom had joined the Union Army and the other the Confederates. Miraculously, they had both survived the war even though one was missing a leg and the other had lost sight in one eye. They were face to face once more after almost four years. Each had been the sworn enemy of the other. After a short, dramatic pause, he asked us, “If you were one of these men, what would you now say to your brother? Would you continue to hate him, or would you try to reconnect to your childhood best buddy again?”

There was a long shocked silence before Mr. Quigley added, “The fact that this followed the Confederate surrender at Appomattox in 1865 is not what matters. What is important is what history can teach us about living our own lives today. I know you know how to read – my job is to help you discover how what you have read might be related to the issues and challenges you are facing!”

My head was spinning that night about the nearly identical message from Mr. Quigley and Mr. Fresius. It was my responsibility to discover and understand how what I was studying was relevant to living my own life today. In fact, I was so fascinated with the idea that I completely neglected to read the assigned pages from Romeo and Juliet. Mistake! Mr. Fresius interrupted the first student after a few lines from the prologue, asking, “What does that mean?” When the poor girl had no answer, she got a special homework assignment to bring a written 300 word essay on her understanding of “Where civil blood makes civil hands unclean.” He then asked the next student to continue, and the process was repeated. Within twenty minutes, every single one of us had written homework for that night. It was an important lesson. I had to be willing invest a lot of effort into my preparation if I was to gain real value from my studies.

Mr. Quigley made history alive, vibrant and relevant every day in his class. It provided the opening to begin talking about the challenges of reconstruction after the civil war and the need to deal with anger, desire for revenge, need to punish and so on – not as some abstract thing that happened long ago and far away but rather as problems that each of us was facing and having to deal with in our own adolescent world right now. In the terrible aftermath of recriminations, blaming and punishing that characterized the Johnson presidency we had the chance to see the bankruptcy of this approach in our response to the nasty thing somebody said to us yesterday.

Taking the lesson from Mr. Fresius’ class to heart, I started going to the library and checking out and reading other history books. Since history was the last class of the day, there was always a little time to talk to Mr. Quigley about the other material, ask questions and even dare to argue with him a bit from time to time. It was wonderful and Mr. Quigley seemed just as excited about it as I was.

After that first day’s experience in Mr. Fresius’ class, I always very carefully read the assigned pages for the next day. The unabridged dictionary became my friend.

Romeo and Juliet was probably the perfect first play to which I could bring this new focus.  There was so much that was relevant to my adolescent life – dealing with raging hormones, experiencing the torture of lost love (even though the girl involved probably never knew I even existed), struggling with demanding and inflexible parents, and being in my share of fistfights. I must have re-read that play three or four times that semester, just because it spoke to me so personally, and it created an insatiable fascination with Shakespeare that has lasted my entire life.

I have attended many Shakespeare performances over the years. Every time I see a familiar play being performed again, I marvel that, this time, it seems even more rich and relevant than I remembered it. When I first saw As You Like It, it was just a silly comedy with ridiculous mixups of gender and forest wanderings that ended up with everyone getting married.

When I see it today, I find a study of betrayal, greed, acceptance of what cannot be changed, the choices we make about how we relate to our lives, and just how multifaceted love can be. What was missing before?

I think it was life and the living of it.

What a deep debt of gratitude I owe Mr. Quigley and Mr. Fresius and the doors they opened to me. The joy of discovery of how other humans dealt with their challenges and limitations in the past has remained undiminished, perhaps even more passionate, to this very day.