Remembering a Wonderful Day in Italy 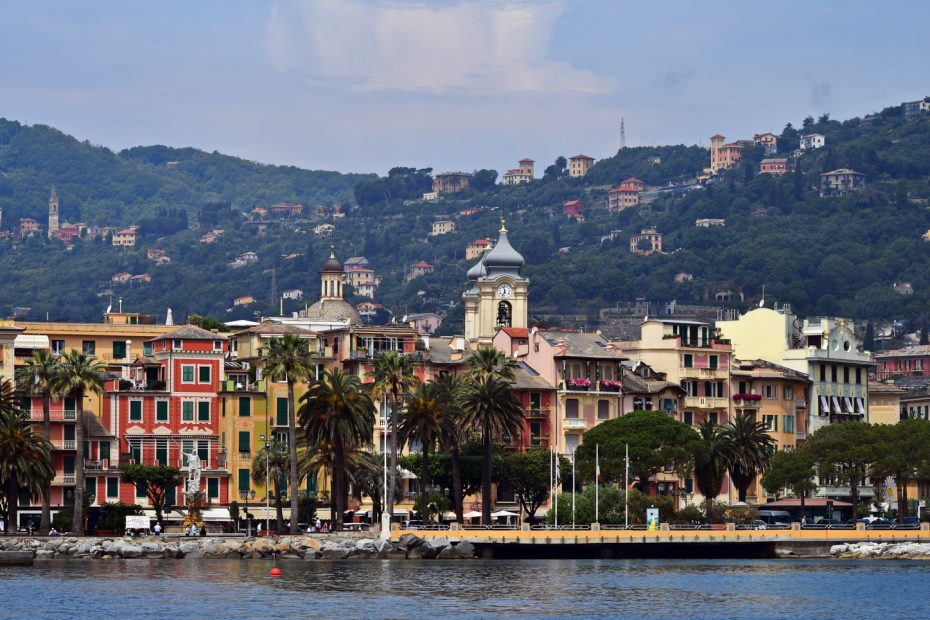 It’s a bit curious how a casual conversation can result in a flood of unexpected memories. We were enjoying a Sunday afternoon coffee with some friends recently and found ourselves talking about how learning a foreign language was very useful in understanding a different culture. Susan and I talked about our many Italian adventures and our experiences of studying Italian in Italy with native speakers. One of our favorite vacation places was near Santa Margherita, a bit south east of Genoa, and I found myself getting a bit nostalgic as I realized it had been more than two years since our last visit to Italy because of the pandemic restrictions.

We had discovered a wonderful vacation apartment in San Lorenzo in the coastal range mountains above Santa Margherita (you can see the community’s church tower at the upper left side of the picture at the top of this post). It had  a spectacular view of the bay and the coast leading toward Cinque Terra, another of our favorite places in Italy. It was far enough away from Santa Margherita that there were fewer tourists, and the owner of the vacation apartment was a gracious and charming woman by the name of Ines. Although Ines had never taught Italian before, she was trained as a teacher and was happy to help us become more proficient with conversational Italian.

Her family had lived in this region (Liguria) for generations and she had  inherited the property (including a couple of other apartment buildings besides the one we were staying in) from her father. She had two grown sons and her husband was working for the company that was dismantling the Costa Concordia in Genoa.

She spoke with some sadness about the situation in Italy and the deterioration of Santa Margherita over the past two decades. The younger people were moving away to larger cities or even leaving Italy entirely because they were unable to find work. Nevertheless, she conveyed an openness to whatever life might bring and a wonderful sense of joy in just being alive. She frequently volunteered to work with poor families through the local church, doing many of the activities that a social worker would normally do. She was very patient with our struggles with Italian and made our time together a lot of fun.

I particularly remember one lesson when Susan had come up with a list of general conversation questions about our favorite films, music, books and so on. Answering the questions (and understanding each other’s answers) provided great practice in conversational Italian. We also gained some very intimate glimpses into Italian life from Ines’ answers.

Once a passionate pianist, she could no longer play because of rheumatism in her hands. She told us that her favorite music composer was Bach because “he invented all the rules of western classical music and then adhered to the rules in every piece that he did.” She actually made the very German assertion that “only through following the rules can there be true freedom.” This from an Italian, the country where red lights and speed limits are, for the most part, just taken as suggestions. We asked about the really exciting things which happened when later composers such as Beethoven and Mahler “broke” the rules. She agreed that wonderfully new and dramatic music had been created in this way – but insisted that that was only possible when you first knew the rules and had learned that discipline.

When the lesson ended, we decided we should take advantage of the return of warm and sunny weather (the previous two days had been cloudy with quite a bit of rain) with a hike to see the very famous Convent on the road to Portofino. The Convent was no longer in use and only open to paying tours but we could still walk around the perimeter and peek inside the courtyard. It was a place of magnificent beauty and great peace.

Then we headed into Portofino Park. The first kilometer or so turned out to be much more ambitious than we had expected. It was very steep and the trail was in terrible condition. The steps were completely washed out in several places and we could only slip and slide on the very muddy slope.

We were both tempted to turn back, but never mentioned the idea out loud because we both expected that going down that trail would have been even more difficult than climbing it. This picture of the Convent was taken much later from a trail that was already descending toward Santa Margherita. Even so, you can see just how high we had to climb. Susan was very happy to be almost to the top of that first ascent! (In another picture a few seconds earlier she looked totally exhausted.)

Hiking down the other side of the ridge was much easier. Although the trail was quite narrow in places, the footing was secure. Every once in a while we would pass a house which appeared to have no access road at all. Some of them were occupied but others were clearly abandoned and in the process of falling apart. We passed by two more abandoned churches before we reached the little community of Nozarego. Its church was enormous and the community was significantly larger than San Lorenzo.

The descent down was breath-taking with incredible views of the water and of Santa Margherita. The route took us right into downtown. We bought some dinner pastries that resembled quiche for dinner – one with artichoke and spinach, the other with zucchini, ricotta cheese and spices.

As we walked out of the restaurant, we looked at each other as we simultaneously realized that hiking home would involve a climb of approximately 350 meters. Susan suggest heading toward the bus stop and I quickly replied, “Good idea!”

Lilly also was in agreement. When we got home, she literally ran to get a big drink of water, then collapsed in her bed and scarcely moved for the rest of the evening. Susan and I did a little better, but not much!

It was such a special day – and there have been so many others that were equally special. Memories are nice, but returning once more to our beloved Italy to create new ones will be even better. Hopefully, declining Covid infection numbers this summer will make that possible.

2 thoughts on “Remembering a Wonderful Day in Italy”