What If I Had Made a Different Choice? 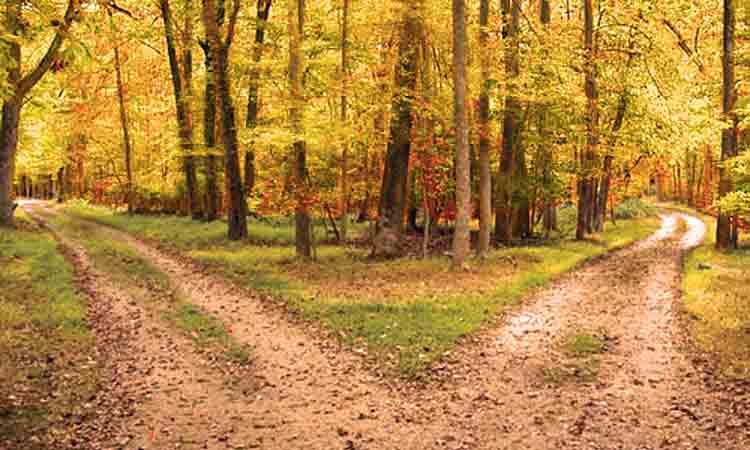 A couple of months ago I wrote about coming to terms with the choices I made in the context of the Vietnam war. I shared how deeply I regretted those choices and wished that they could be undone. I wrote that “I did honestly what my heart told me was right, given the awareness and perspective that I had had at the time. What else could I have done?  My ignorance was my karma, and the consequences of the actions I took followed inexorably from that.”

What is also true is that my process of coming to terms with my choices and forgiving myself for my mistakes is really only relevant to things that have happened in my past. How can I do a better job of being a little less ignorant today? How am I to know what I am ignorant about? The creative and dramatic arts can sometimes provide some insights.

Robert Frost, for example, wrote poignantly about this in his poem The Road Not Taken:

Two roads diverged in a yellow wood,
And sorry I could not travel both
And be one traveler, long I stood
And looked down one as far as I could
To where it bent in the undergrowth;

Then took the other, as just as fair,
And having perhaps the better claim,
Because it was grassy and wanted wear;
Though as for that the passing there
Had worn them really about the same,

And both that morning equally lay
In leaves no step had trodden black.
Oh, I kept the first for another day!
Yet knowing how way leads on to way,
I doubted if I should ever come back.

I shall be telling this with a sigh
Somewhere ages and ages hence:
Two roads diverged in a wood, and I—
I took the one less traveled by,
And that has made all the difference.

Frost’s traveler begins his search for wisdom first by recognizing that he has a choice to make. This alone is a significant step. How many times have I justified my actions by claiming that “I had no choice”, only to realize much later that there were other alternatives?

The traveler takes the time to explore both options as best as he can. He then chooses one path, even as he acknowledges that both paths were worn “really about the same” and that, in truth, he couldn’t really tell that one was grassier because both “equally lay in leaves [that] no step had trodden black.” With these lines he acknowledges that he really did not know whether his choice was the less travelled path or not. Yet Frost still ends his poem with the assertion that “… that has made all the difference”.  What, then, made the big difference in his life? Perhaps it was the fact that he actively made a choice rather than passively allowing circumstances to take him one way or another. Perhaps it was his acceptance of responsibility for his decision after he had done his best to understand his choices.

Understanding choices is another fascinating topic. At the beginning of the poem, Frost writes that “…I could not travel both [paths] and be one traveler…” We all experience our world in this way: a continuum of choices where each choice forever precludes the alternate paths. It’s obvious, right? But what if this “obviousness” is misleading? What if there could be parallel universes which could accommodate every possible alternative?

This possibility has certainly been a rich source of fictional drama in books and on the stage and screen. Some of them deal with what is called alternate history: Nazi Germany successfully defeated and occupied the UK in 1940 or the Confederacy won the civil war in the US. Others present parallel realities of different contrasting versions of the basic narrative: a BBC recently reporter described the current Russian leadership and Vladimir Putin as “living in a parallel universe” with regard to the war in Ukraine.

There are some worthwhile insights into the consequences of our choices that can be gained from exploring these dramatic works, yet we might be inclined to dismiss all of this as little more than entertaining speculation. There is, however, some troubling indications that there might in fact be parallel universes at the level of atomic and subatomic particles. A whole new theory of the nature of the universe has been developed over the past century that attempts to make sense of these observations. That theory is called Quantum Mechanics.

Let’s explore this “weirdness” a bit before asking what a few of these dramatic pieces can show us about the nature of choice.

Everyone knows that something dripping into water will cause rippling waves that expand in a circular fashion. If more than one drop falls, both will generate waves. When they encounter each other, the height of the two waves adds together. Two peaks meet, the height of the peak is doubled; if a peak meets a trough, they cancel each other out.

If you put solid particles in a container with two holes in the bottom (think sand, sugar or salt), the particles will simply stream through the holes and form two piles). These piles do not radiate outward in a wave pattern. Waves are waves and particles are particles for all eternity.

Well, perhaps not. If we look into the world of atoms and particles, things are not nearly so clear. Light is a very good example. Using a laser beam to generate a coherent, steady stream of light produces results identical to that previously described for water. The smallest constituent of that laser light, however, consists of subatomic particles called photons. It is possible to launch photons one at a time so that they have no interaction with each other as they pass through the slits.

What pattern do you see when you do this? Initially it appears to be the particle pattern that matches that of sand and salt, but as more and more photons pass through the slits, the “piles” begin to interact with each other and gradually create the interference pattern of waves! How can an individual photon “know” that there are two slits? Even more strange, if the observer turns on a detector that will determine which slit an individual photon passed through, the wave pattern disappears and you see only the particle behavior. Said in another way, light appears to be made up of particles when you are watching but is made up of waves when you are not. It gets even weirder, but that’s probably enough for this post[1].

Of course the same phenomenon can be observed for all of the other subatomic particles such as the electron, all the radioactive decay particles, and the as yet unidentified forces accelerating the expansion of the universe and making up dark matter and dark energy. How can all these subatomic particles be two different things at the same time? Scientists are devoting their entire lives and careers to gathering and analyzing data to try and answer this question.

To summarize: atoms and particles could exist simultaneously in both states until someone observed them – at which point the two possibilities would collapse into a single observable reality. In Quantum Mechanics theory, this was referred to as the wavefunction collapse. Confused? You are not alone. Albert Einstein at one point dismissed the whole idea with the observation that “God does not play dice with the universe.”

The possibility of parallel universes which could accommodate every possible alternative became known as the Many Worlds Interpretation (MWI) of Quantum Mechanics where the observer was also part of the process rather than outside of it. This rather cleverly avoided the waveform collapse problem since light as both particle and wave would exist simultaneously, each with its own observer.

As science explores this at the subatomic level, it has sparked a flood of creative material in the arts: countless books, movies, plays and television programs explore the questions about the meaning and significance of the choices we make in our lives. I’ll explore a few favorites based on alternative universes in my next post, and look at some others based on multiple parallel universes in the following post.

[1] You can read more details about the wave/particle demonstrations here.

9 thoughts on “What If I Had Made a Different Choice?”