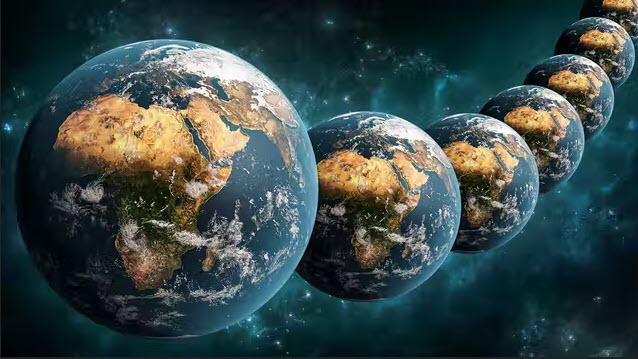 If we exist in every parallel universe that was created by each choice we have made, why do our choices matter? There must be some universe where we made and will make the best possible choices at every point in our lives, will live well and die happy. This doesn’t seem to leave me with any responsibility for my life choices at all, so why not do whatever I want and not worry about the consequences? The problem with this reasoning is that we can experience our life in only one universe – the one created by our moment to moment choices. In my last post, Criteria for Good Choices, I wrote about the use of alternate universes in poetry and film to explore some of the consequences of our choices. In this post I want to look at a few movies and stage plays that use the notion of parallel universes to provide some insight into the role of our choices.

The idea of multiple parallel realities has been an endless source of inspiration for movie and television entertainment – Matrix, Spider-Man, Avengers and Batman are obvious examples. Marvel Films will release two films fully embracing the idea of multiple parallel realities this very month of May. Entertaining, perhaps, but not very helpful in exploring why our choices matter.

Groundhog Day lets us experience a sequential view of the parallel universes of a single day for Phil Conner – the second day of February – and the celebration of Groundhog Day in Punxsutawney, Pennsylvania.

We are introduced the Phil as an arrogant weatherman who makes no secret of his contempt for the assignment and the “hicks” who live in that small town. He manages to offend almost everyone, including his producer, Rita Hansen. When he awakens the next morning, it is still 2 February.

Phil remembers everything that has happened to him in his previous days and he uses this knowledge to his advantage – binge eating, seducing women, and committing robberies. It seems that there are no consequences for any of his actions.

Phil gradually realizes that none of this makes him happy and he grows increasingly depressed. He tries to escape by committing suicide in a variety of ways, but that doesn’t provide a way out at all because he wakes up again and again on the morning of 2 February.

He finally decides to use his knowledge from previous multi-universes to change himself and others: he saves people from deadly accidents and misfortunes. He learns to play the piano, sculpt ice, and speak French. Along the way he falls madly in love with Rita.

Near the end of the movie we see Phil and Rita playing card games in his room. As Rita is about to fall asleep, Phil tells her that no matter what happens, even if he is doomed to continue waking alone each morning forever, he wants her to know that he is finally happy because he loves her. That is the key that allows Phil to escape the endless repetition of the day and he awakens the next morning with Rita still in bed next to him.

Even though that is where the movie ends, it’s clear that the rest of his life still lies ahead – and perhaps even his eventual death may not be an “end” at all. Many religious ideologies would suggest that our death is only a transition to another multi-universe of new choices. Tibetan Buddhism speaks of countless cycles of reincarnation where our spirit can choose to learn from past mistakes and make better life decisions. Phil Conner’s endless repetition of Groundhog day could easily be seen in this light, and his eventual escape from the time loop means that he has become a bodhisattva – one committed to helping all other beings achieve what the Buddhists call Nirvana.

In Catholicism, Purgatory was seen as a place of purification after death of a soul’s imperfections from venial sins before entering into heaven. One could easily see Phil’s situation as a visualization of Purgatory from which he could escape only by embracing selflessness and compassionate love for others.

Helping the audience understand what is going on with multiple universes in movie or television form is certainly a challenge, but the nature of this art form offers some helpful tools. For example, post-production editing and lighting changes provide reasonable opportunities for the actors to rest and transition to a “different” universe.

Unfortunately, most of these tools cannot be used in live stage performances. Actors must be highly flexible and able to shift tone, body posture and attitude literally from one moment to the next if the audience is to have any chance of understanding what is going on. Understandably, the attempt is only seldom made. There are two that I am aware of that I would like to explore.

One is a play by Alan Ayckbourn entitled Intimate Exchanges. It was written between 1982 and 1983 with a 1984 premiere in London. It consists of eight major stories that all originating from a single opening scene (green in the diagram) that lasts only a few seconds. One of the characters chooses either to stop and smoke a cigarette or to continue with the spring cleaning. The cigarette smoking choice results in the scene where “A gardener calls”; the other choice leads to the scene “A visit from a Friend”. The play then progresses with the characters making various choices, each of which goes into a different parallel universe.

Each variation of the play is made up of 5 scenes with jumps in time between them that are common across all of the variations. After “How it Began”, the second scene occurs 5 seconds later. The events of the third scene occur 5 days later. There is then an interval of 5 weeks before the fourth scene and, finally, a gap of 5 years before the fifth scene.

With sixteen hours of dialog, the play was produced only once more in its entirety (Scarborough and New York, 2006-2008). If you are interested, you can read about the details of each play variation here. If you study the choice points in the diagram, you can see that Ayckbourn wants us to clearly see that the tiny, careless choices that we make can result in major shifts in the lives that we actually experience.

Ayckbourn made it a little easier on the audience by presenting the various choice paths sequentially – we could follow one thread through its universe to the end before returning to “How it Began” and entering a different one.

Nick Payne wrote a fascinating play called Constellations which first premiered in 2012 in London. In this play the audience must follow several realities that unfold at the same time. There are many gaps and each audience member must figure out the connections that make sense. For example, is the difference between one interaction and the next to be explained by poor listening or misunderstanding? Does it reflect significantly different ethical standards or a fundamental personality difference?

The two characters are Marianne and Roland. Marianne is a university professor researching early universe cosmology, string theory and the Quantum Mechanics idea of multi-universes in which different versions of ourselves are simultaneously living out our lives. Roland, on the other hand, is a beekeeper. He is surrounded by earthly creatures who have no choices to make because they are born to a single purpose: to work, to procreate with the queen, or to gather pollen to make honey. Each has one life path with the same result.

There are eight different situations that are portrayed, each with several versions of conversation and circumstances:

As we shift forward and backward in time, we gradually understand that the central conversation concerns the deterioration of Marianne’s brain due to her tumor and her decision to visit a euthanasia clinic. One could say that Payne’s view of proliferating multi-universes is one that begins with birth, broadens out into an enormous labyrinth, then condenses again around the fixed point that awaits all of us: death.

Or, perhaps not. In the final group of alternate conversations, Marianne and Roland return to the time when they reconnected at the dance class. Was this no more than a last memory just before death, or does it represent a return to yet another parallel universe where they can work through all their choices again? That is left to each audience member to decide for themselves.

As I wrote in my blog post Thoughts While Walking, our bookend dates of birth and death “really have nothing to do with defining a good or a wasted life.” Even if each of my possible lifetimes exists in some parallel universe, there is only one that I actually experience – the one that flows from each choice that I make in my lifetime. To paraphrase the last line of Robert Frost’s poem The Road Not Taken, it’s our choices that make all the difference.

6 thoughts on “Why Choices Matter”